Got a new sweatshirt yet? Before I keep going with this whole sweats trend thing, let me go on record by saying it’s perfectly cool to just wear your sweatshirt with jeans or whatever. Some days it’s best to keep things simple right?

Part two here is pretty simple as well. Imagine your sweatshirt is a sweater. Get dressed accordingly. My favorite is the button down under the sweatshirt. It just looks fresh and elevates the sweatshirt a bit while still keeping things casual. 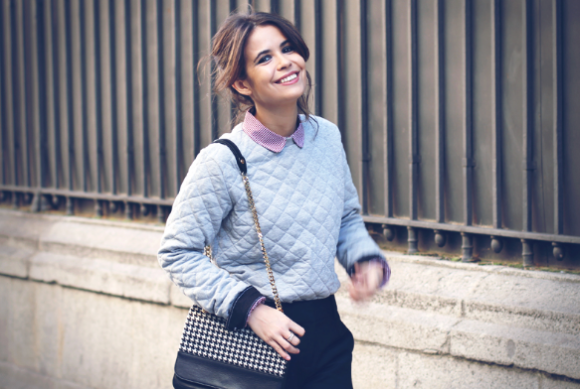 I mean how cute is this Spanish blogger in her quilted sweatshirt?

This image has been all over my Pinterest feed. A simple black gingham shirt is on my wish list but any printed shirt (stripe, floral, plaid, polka!) as long as the sweatshirt on top doesn’t get too busy.

Along the lines of Part 1, a skirt is a great option and some combinations might even be office worthy. I think a plain sweatshirt would look super cute with a big necklace. Maybe some heels with that for a night out? This image is J.Crew.

The print mix here makes this ensemble particularly adorable but any sweatshirt would look great under a blazer. A cozy fall look with boots and a scarf too.

As we really start to get into fall (at least according to the calendar — we’ve had a heat wave this weekend in San Francisco!), I’ve noticed lots of cute new arrivals in the sweatshirt department. Like this one. Also, apparently, Meryl Streep wore a sweatshirt to a red carpet event. So we’re really on to something here!